Why Use Hemp Cloth Instead of Fiberglass?

Hemp cloth for surfboards is a relatively recent application that the SOLID design team helped pioneer. Aside from the fact that it is a natural, plant-based fiber, there are a number of other reasons why we think hemp is one of the most cutting edge materials for surfboard design.

1. Hemp cloth for surfboards is not common. But, hemp fabric production is an ancient practice. Ancient Mesopotamians were cultivating hemp at least 8,000 years ago. They would weave it into fabrics. It is believed to be the first domestically utilized plant in modern civilization. Some evidence suggests the cultivation dates back a few thousand years earlier.

3. Hemp has the strongest and longest plant fibers in the world. Hemp is resistant to abrasion and rot. For this reason, the U.S. military has used hemp for uniforms, baggage, parachute webbing, and ship rigging. This is one of the main reasons we decided to use it in our surfboards.

4. Hemp grows without pesticides. Other common natural materials like cotton require pesticides to maintain the crops. Pesticides have harmful side effects among humans, plants, and animals. In high amounts, pesticide runoff can also contaminate water supplies. The industrial production of hemp is therefore more sustainable than most industrial agriculture.

5. Hemp can help eliminate toxins and radioactive materials from soil. Not only does hemp remove carbon from the atmosphere, but heavy metals from soil as well. For example after the Chernobyl disaster scientists planted hemp in the contaminated soil. Hemp was shown to absorb the toxic heavy metals better than any other plant. 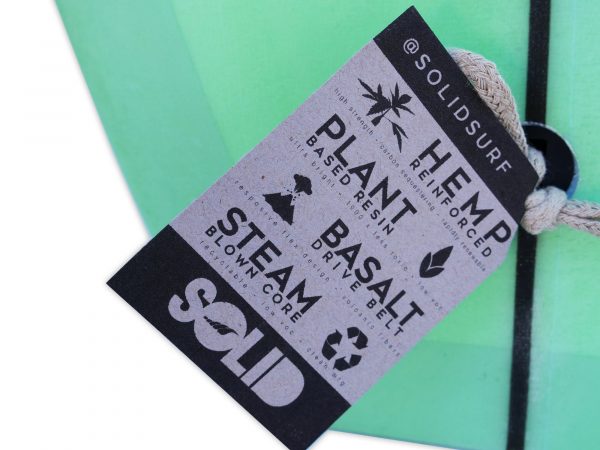 Sustainable Surfboards: How to Recycle a Surfboard